All It Took Was 20 Years of Searching! 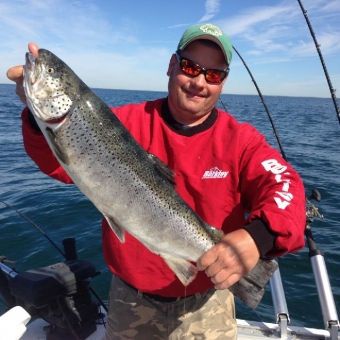 At the age of 7 I did not having much interest in fishing, I use to spend time curled up under the bow of my dad's 13' cedar strip boat.

I would sleep the day away while my dad chased his two other friends around the lake, in search of anything that would bite the end of their lines.

In 1991, at the age of 16, my father and I entered the first annual 444 International Walleye Tournament hosted by the Port Colborne District Conservation Club.

Watching other teams drag in huge fish and putting double digit weights on the board, my father and I did not manage to foul hook one fish.

Frustrated but determined to learn how to catch fish on a consistent basis, the obsession began!

In 2011, after 20 years of fishing tournaments and sharpening our fishing skills, it was finally our year!

My father and I and our team took First Place and $10,000 in the 20th Annual 444 International Walleye Tournament.

With our first major win under the belt, the next obsession began – I wanted to build a better mouse trap! (sort of speak!).

It all started with the Yaleye Team style of fishing.

The Yaleye Teams successful style of fishing lake Erie for the elusive Walleye, stretches your trolling lines long – 200' to 300' behind the boat!

Bringing in 5 lb to 8 lb Walleye at those distances do not seem to push our fishing equipment to the limit.

But we always seemed to have a story about how that one big po fish got away by breaking lines and straightening hooks.

So, back to the drawing board I went.

After every time using a favourite line up of harnesses for a weekend, we still would have one of the high producing harnesses break!

Now paranoid of losing another big fish, we would be constantly checking the harnesses for damage and re-tie and harnesses that were suspect. But this takes time away when the fish are biting.

I kept searching and experimenting with fluorocarbon line which would break quicker than monofilament.

Finally, I went to wire.

Wire was the strength I needed – wire was great! We started putting bigger consistent fish in the boat and little worry of the harness breaking.

Now we were finding that since the line we were using has no stretch, the harness was Dacron coated wire, there had to be “some give" in the assembly!

The “give" came from the Treble hook! The hooks weren't strong enough

At the 2011 Dunkirk Walleye Tournament, we were off of Port Maitland washing lures with not much happening in the way of fish biting.

We were just about to start pulling lines to relocate when 4 out of the 8 rods we had in the water lit up! Pulling in consistent 8 lb fish in the boat we were hoping to hit that kicker 10 lber.

Out of the corner of my eye, I saw the lead core line take a heavy pull. Consistent reeling on the lead line, the fish was not pulling but is putting the brakes on all the way in!

No visual on the fish yet, the line counter on the reel indicated that the fish was right under the boat!

The water was a calm mirror, I focus past my reflection in the water. Once my eyes focused all I could see was the biggest walleye I had ever seen, with all of its fins flared out swimming in an 'S' pattern just under the surface!

Just as I was going to say to my teammate “it's a F#$@ing Monster,“ he began to raise the rod tip in the air to force the fish to the surface.

Once the fish felt that extra force, one flick of the his head and he was gone! Standing there in disbelief as to what I just witnessed – a 20 lber? ... maybe but we can only speculate! – I inspected the harness to see if it was broke, no break but a straight as an arrow treble hook what all that remain.

That was when I absolutely knew I needed stronger hooks.

Please CLICK HERE to view a calendar of Lake Erie Tournaments for 2016.

Yaleye name was actually was my wife's idea. We were trying to come up with a name for our boat.

Looking for a walleye tournament this spring?

Get out on your boat and get involved in this year's upcoming tournaments, including the Easter Lake Erie Professional Walleye Series.